As we have learned in the blog posts on God’s Purpose for Marriage, God values this covenant partnership, and it is a vital piece to God’s rule, reign, and Kingdom. God doesn’t leave us without guidance on how that covenant partnership should be formed. We know that left to ourselves, we would not reflect God appropriately. So God, in Genesis 2, lays out many foundational truths connected to His design for this Kingdom partnership.

The Lord God said, “It is not good for the man to be alone. I will make a helper suitable for him.” Now the Lord God had formed out of the ground all the wild animals and all the birds in the sky. He brought them to the man to see what he would name them; and whatever the man called each living creature, that was its name. So the man gave names to all the livestock, the birds in the sky and all the wild animals.

But for Adam no suitable helper was found. So the Lord God caused the man to fall into a deep sleep; and while he was sleeping, he took one of the man’s ribs and then closed up the place with flesh. Then the Lord God made a woman from the rib he had taken out of the man, and he brought her to the man. The man said,

“This is now bone of my bones
and flesh of my flesh;
she shall be called ‘woman,’
for she was taken out of man.”

That is why a man leaves his father and mother and is united [cleaves] to his wife, and they become one flesh. Adam and his wife were both naked, and they felt no shame. (Genesis 2:18-25)

From the passage above, we can observe the following:

Let’s take time to dissect this process that leads to oneness of two people, the cornerstone of God’s covenant partnership of marriage.

“So God created mankind in His own image, in the image of God He created them; male and female he created them.” (Genesis 1:27)

Men and women are equal in value and worth in the eyes of the Lord; however, there is distinctiveness between them. Men and women are not the same or interchangeable. Each has different ways they reflect God—different physical, emotional, and mental characteristics—and different roles in the Kingdom partnership. The physical, emotional, and mental differences are not hard and fast, or black and white. Since we are all unique individuals designed by our Creator, our characteristics exist on a continuum and have significant overlap. Neither reflects God’s traits exclusively.

However, in the area of roles, we do see some distinctiveness in the overarching calls of Adam and Eve. God graciously lays out core roles for each spouse and core responses from each spouse that create a connected, positive cycle in marriage. These roles are essential to marriage, but they are not all one does in marriage. Roles address one’s responsibility, not one’s value or competency. God’s word reminds us that our roles and responses must be covered in mutual submission, unity, and humility.

Often when people discuss biblical roles, they find themselves in a discussion of functions. Couples need to address both the roles and functions of marriage life, but those are very different conversations. We will cover the functions conversation later. Roles are overarching, foundational, unmoving, God-given responsibilities that fulfill His design and purpose for marriage. They are responsibility-focused and do not create a comprehensive lifestyle or a rigid framework, thereby offering latitude, creativity, and flexibility for a marriage and family. Roles are designed to keep our marriage relationship accurately reflecting God. As John Piper says, “Marriage exists to display the merciful covenant-keeping love of Christ and the faithfulness of His bride.”1

Some definitions may be helpful before we move on to discuss core roles:
Functions: the tasks of marriage and family; often classified based on giftedness, competency, seasons of life, or circumstances of a family.

Core Role: the unconditional, essential responsibility that God has given husbands and wives to fulfill the marriage design of oneness and reflecting God.

Response: the reaction, feedback, or outflow of the core role exhibited in thought, word, and action, which encourages and propels the spouse into their core role, looping marriage into an interconnected cycle.

Let's keep this diagram in our minds as we dive into the discussion of roles and responses: 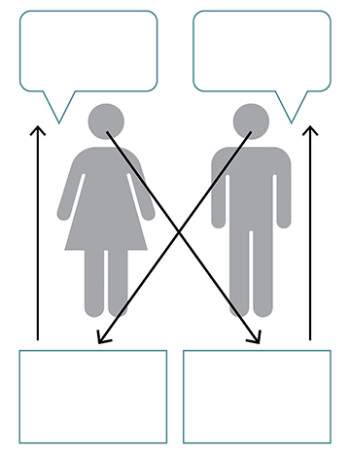