The Beauty of Seeing

This story begins, oddly enough, in a prison.

One day in 2012, as Lynda Roersma was visiting a correctional facility in Muskegon, she was struck by how much the prison functioned as a community: the men there were simply normal people, doing normal things.

As she approached the gymnasium, she heard worship music playing over the loudspeakers, and thought, “wow, how cool that they’re playing worship music for the inmates to listen to!”
Once she entered the gym, however, Lynda realized that the music wasn’t coming from a loudspeaker: there was a group of men in orange uniforms gathered in a corner of the room, singing “How Great is Our God” together, worshipping.

Lynda was blown away. She had been looking at their orange uniforms instead of seeing them as they truly were: human beings, made in the image of God.
That idea of the “orange labels” that we place on people has stuck with Lynda. She has become increasingly aware of how she sees people.

Without even realizing it, we place all kinds of labels on people, don’t we? Whether it’s where they’re from, where they work, how much education they’ve received, the color of their skin, the political party they associate with...
And, often, instead of seeing them as people deserving of love, we see them as those labels.

That experience in the prison caused a fundamental shift in Lynda: she had to stop and ask herself: “Am I going to start truly seeing the people around me? There are people different from me, everywhere I go: how am I going to see them?”

She has been convinced of the beauty of truly seeing people. 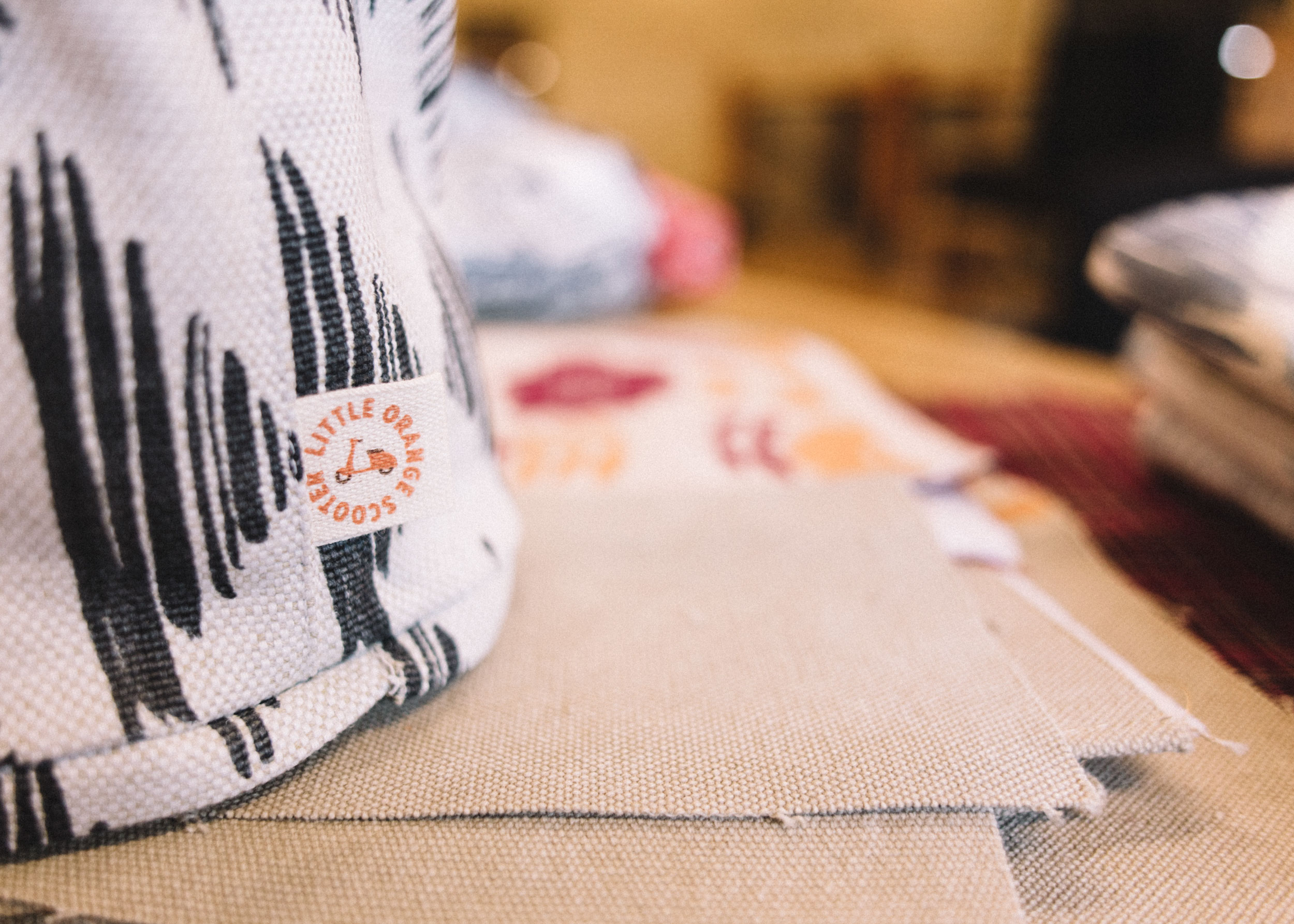 The next step in this journey happened when a speaker from a missions partner came to Crossroads and shared about their work in developing nations, providing communities with clean water. He shared that one major difficulty they faced with their work was that, when one of the wells they had built suddenly broke, the members of that community would wait for the Americans to come fix their well.

He shared that they had recognized the need to teach entrepreneurship among the communities they ministered to, instead of just digging wells for them and then leaving. They wanted to give members of the community a sense of ownership of their well, and empower them with the tools and skills to become self-sustaining.

As he was speaking, Lynda was hit with a thought: “Could I sew with refugees?” She already had the skill of sewing: could she equip other women with that same skill, and give them an avenue to entrepreneurship?

She had no idea what that looked like. She didn’t even know any refugees!

For a while, it was just a thought, in the back of her mind. But, little by little, God connected her with the right people. Individuals from Bethany Christian Services helped connect her with a few refugee women. Another woman offered to help with the administrative side of things for a while.

“If not for her, I might never have left my couch!” Lynda exclaimed. 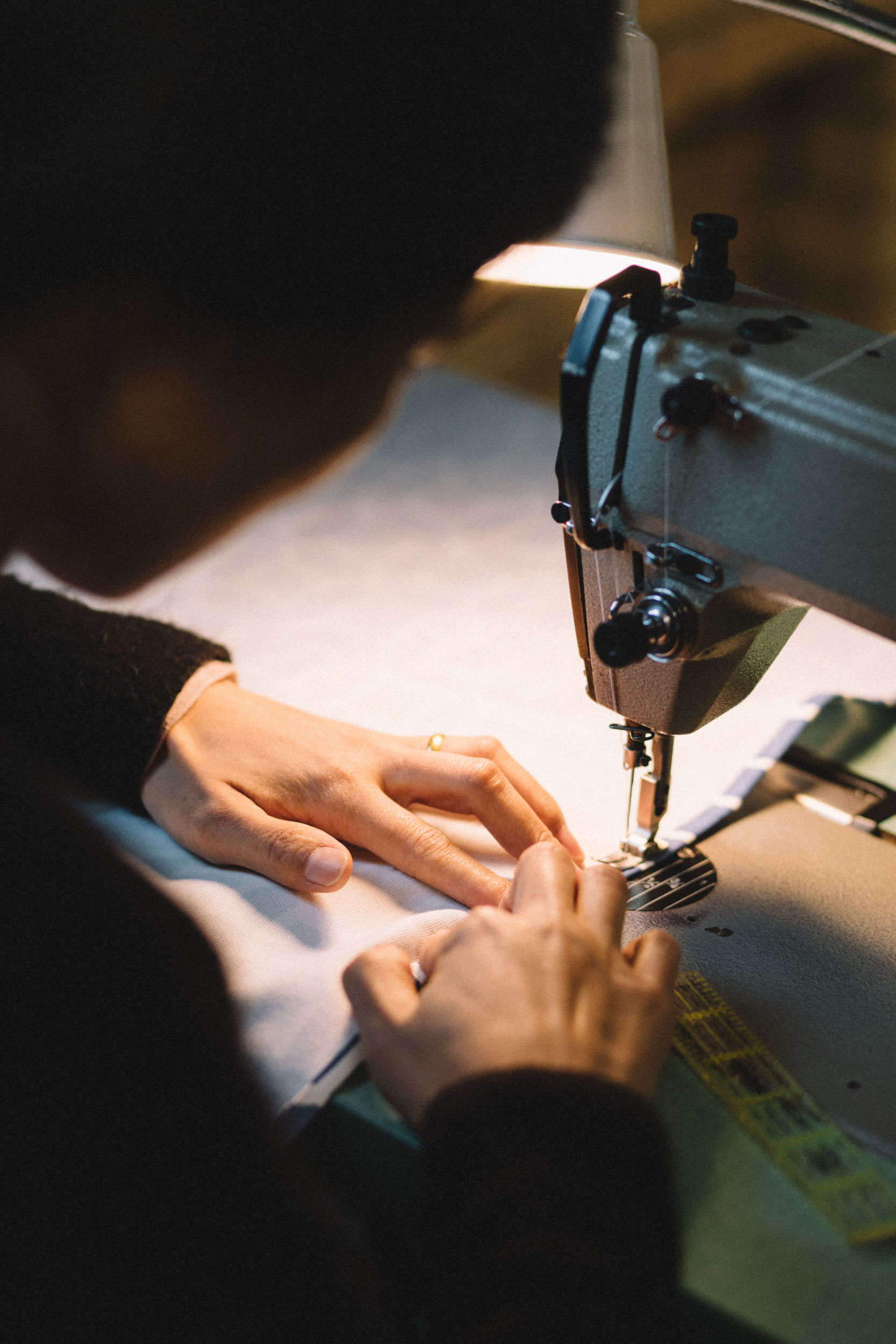 It started out very simply: with a few women regularly meeting together in Lynda’s home. She started just teaching sewing. Every week, they would take on a small sewing project, and the women would take home whatever they had made.

They took their first big sewing job for a women’s event at Crossroads in 2016. The women at Little Orange Scooter made 500 bags in 3 weeks!

Because of that event, more networking began to happen: people kept reaching out with new opportunities! 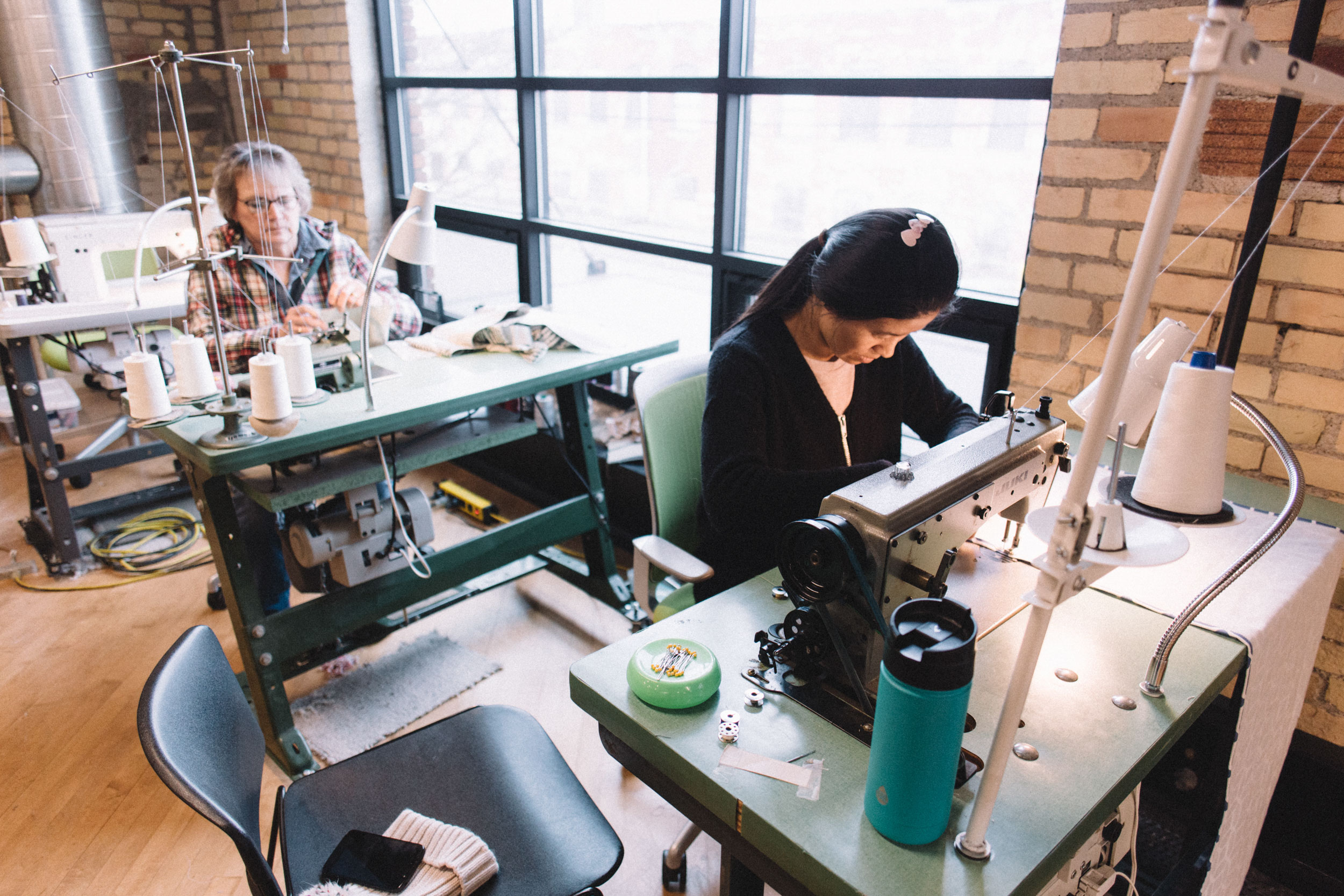 Now, Little Orange Scooter works out of a workspace at Next Step of West Michigan: a construction company that employs men and women transitioning out of the prison system. Lynda loves the work they’re doing, and loves the fact that this story started with the color orange and has now come full circle.

Working out of Next Step’s offices has given the women of Little Orange Scooter a place to be together. Sometimes, they take work home with them, but Lynda loves working in this space, because it’s is where the relationships happen. For Lynda, the best, most meaningful part of this job is the opportunity to form relationships.

“I think I’m teaching them,” Lynda shared, “but they teach me so much!” Working together, with women of many different backgrounds, has opened each of them up to new perspectives: new ways of seeing, saying, and doing things.

However, the world has changed a lot, in the past year.
One of the big challenges Covid-19 has presented for Little Orange Scooter is that the women have mainly had to work from home this year. Not being able to work side by side with them and build relationships with them has felt like a significant loss.

Lynda still occasionally gets see them, whenever she’s able to stop by their houses to drop off projects to work on at home. But it’s not the same as working beside them, week after week.

Another challenge that this season has created is that Little Orange Scooter used to sell most of their products at events around West Michigan. Now, they’ve had to rely a lot more on digital avenues like Etsy, their website, and their social media accounts.

Since this Spring, they’ve also made thousands of face masks in colorful, cheerful patterns, some of which we had at our first in-person gatherings back in the building earlier this year. 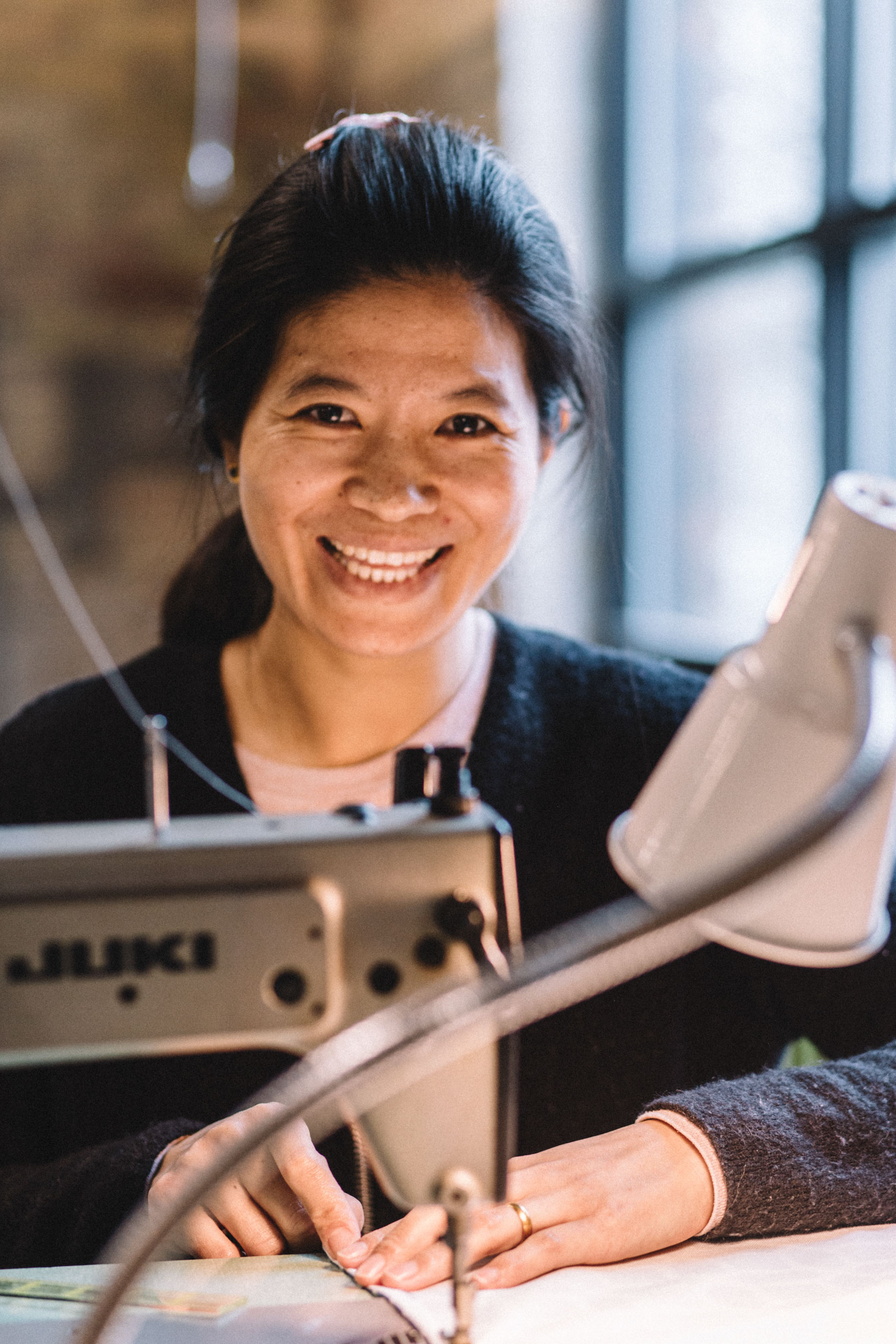 Ja Nu (pictured above) has been in the US since last April. She’s originally from Burma, but fled to Malaysia several years ago as a refugee because of a decades-long civil war: a conflict that is still happening today. She lived in Malaysia for 7 years, and met her husband while she was there, who was also a refugee. They had a daughter in Malaysia, but since they were there on a refugee visa, she wasn’t allowed to go to the government school. Because of the poor education options in Malaysia, Ja Nu and her husband decided to wait until they got to America before having another child.

When I met with her, she was pregnant, and since then, has given birth to a beautiful baby girl!

Ja Nu was already a very accomplished seamstress, before coming to the US. She sews traditional Burmese dresses with intricate embroidery and beadwork.
Her parents are still in Burma, and she misses them terribly. She told us that the country has very little infrastructure, so their homes have no heat, and their lives have been extremely difficult.

Her family has faced horrifying things, because of the civil war.
In 2017, her older brother went missing for 9 days. When he was finally found, it was discovered that he had been killed from the blast of a landmine, leaving behind a wife and children.
When she pulled up a picture of her brother to show me, I thought it would a photo of him from the past—of the way she remembered him—but it was a photo of how they found him, lying dead on the grass. It was sobering, and heart breaking. Lynda and I were stunned into grief and silence: heavy with the weight of all Ja Nu has suffered and lost.

A few of the women who work at Little Orange Scooter are from Burma, and all of them are part of a Kachin (a Burmese ethnic group) church in Grand Rapids. Through this church, they’ve been able to form a community of immigrants and refugees from Burma, with Bible studies, shared meals on Sundays, and the opportunity to fellowship and form friendships within their own culture. 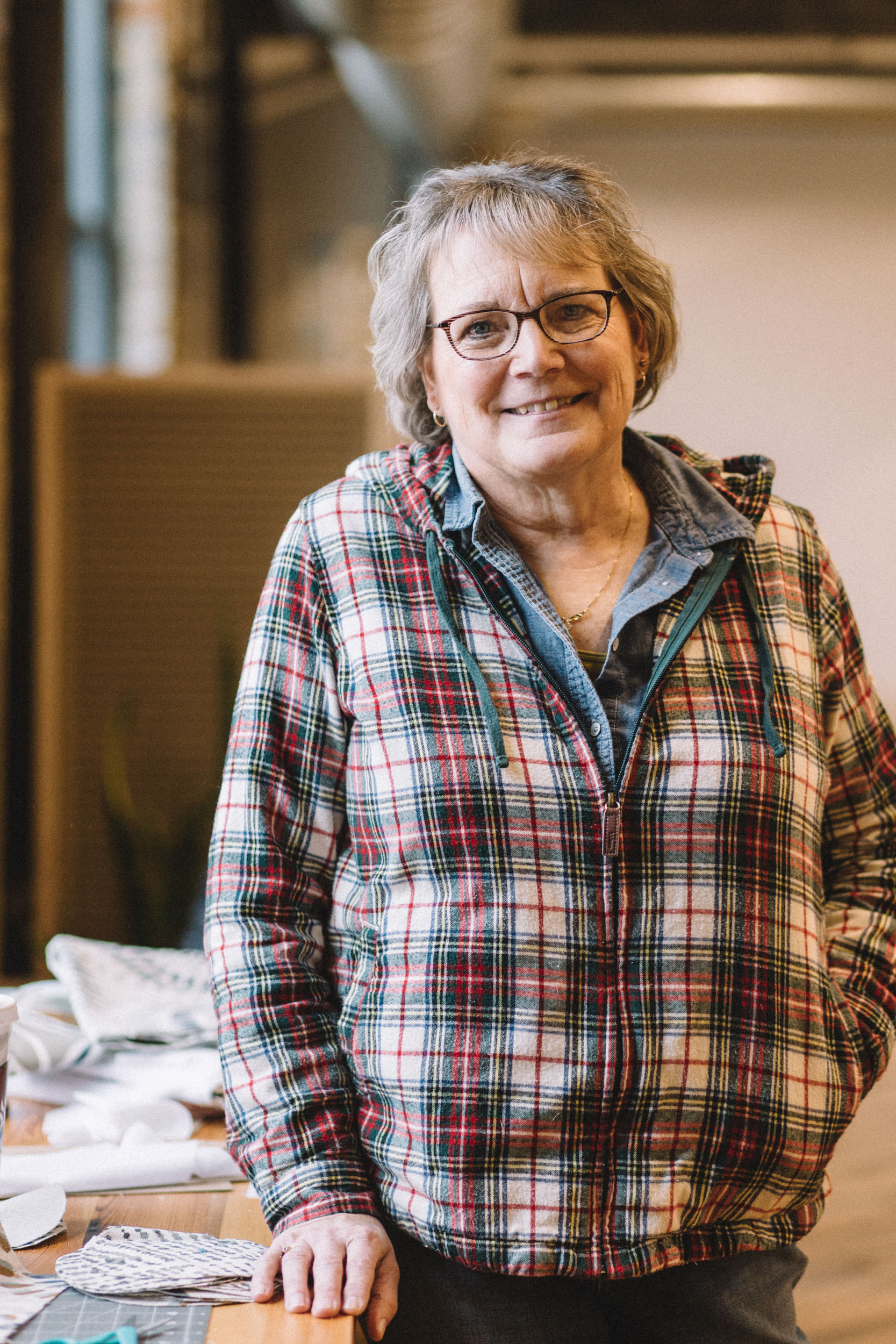 You know the way people light up when they’re talking about something they’re passionate about? That’s what happens to Lynda, once she starts talking about Little Orange Scooter. She stopped, at one point, with laugh and a big smile on her face, and said, “Can you tell I’m excited about this?!”

But, she says, “I don’t say to any of my friends, ‘you should do what I’m doing!’”
The beautiful thing is that God has gifted each of us in our own unique ways, and has given each of us passions about different things.

At Crossroads, we talk a lot about our individual “street corners:” the people and places we are uniquely able to influence, because of who we are, how we’re gifted, and where God has placed us.

Whether you’re at home with kids, taking care of an aging parent, at school, or in the workplace:
“Our calling is whatever we do, every day,” Lynda said. 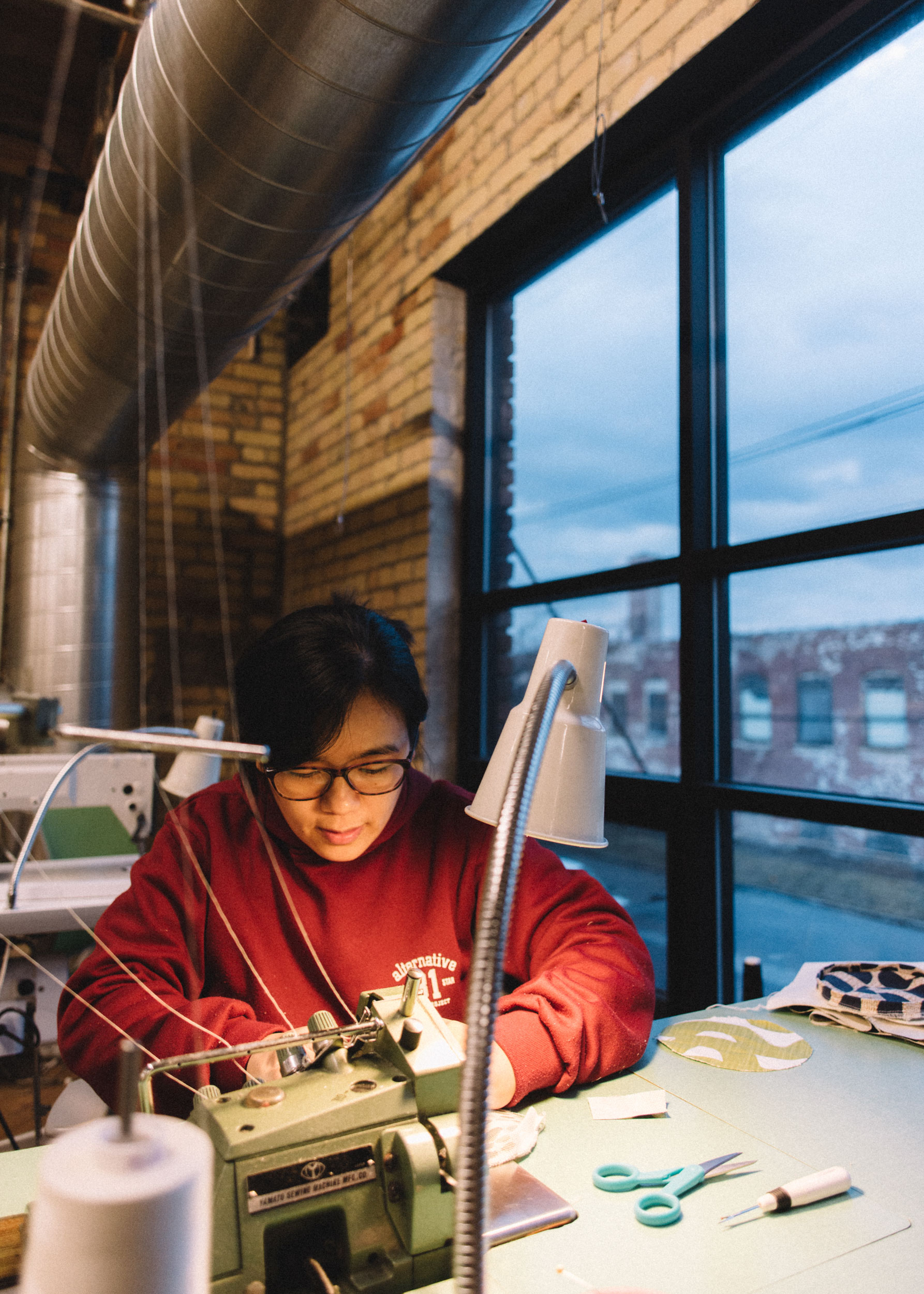 This story, ultimately, starts and ends with simply seeing people.

Lynda’s experience at the prison didn’t just impact her work with Little Orange Scooter: it’s inspired her to truly see people everywhere she goes.
She has had to step back and ask herself, “Who is in my world?” And then ask God, “How do I love them well?”

Will we do the same?